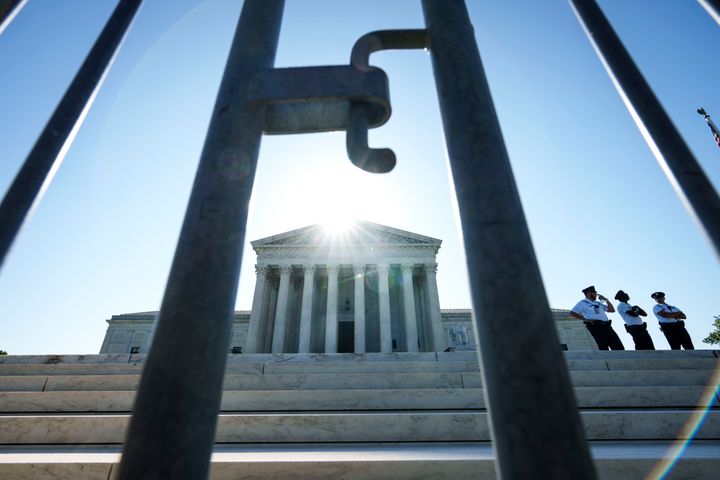 By Elise Foley and Paul Blumenthal

The ruling in Brnovich v. DNC could have implications for voting measures nationwide.

The Supreme Court dealt another blow to the Voting Rights Act on Thursday, ruling in favor of Republicans that Arizona can maintain restrictions that critics say discriminate against nonwhite voters.

The ruling will have sweeping implications, opening the door for similar restrictions in other states by saying they are acceptable under Section 2 of the Voting Rights Act. However, the ruling stopped short of fully gutting Section 2.

Moments later — and again in a 6-3 split between conservative and liberal justices — the court issued a ruling in Americans for Prosperity Foundation v. Bonta, saying California must stop collecting the names and addresses of top donors to charities. That ruling, written by Chief Justice John Roberts, could pose a problem for campaign finance disclosure laws in the future.

The decision in Brnovich v. DNC came just over eight years after Roberts authored a ruling that gutted another key provision of the pivotal 1965 law, passed in the wake of violence against Black Americans protesting to guarantee their right to vote.

The Supreme Court’s 2013 decision paved the way for states, recently motivated by former President Donald Trump’s repeatedly disproven lies about the 2020 election, to enact voting restrictions that could curtail access to the polls. Republican-controlled legislatures had passed more than 20 voting restriction bills in 14 states as of May, according to the Brennan Center for Justice, with another 60 bills in the works. The Brnovich v. DNC decision now stands to open the floodgates.

The case, which is consolidated with Arizona Republican Party v. Democratic National Committee, focuses on two voting restrictions in the state that the 9th Circuit found discriminatory toward people of color.

One is Arizona’s policy of discarding ballots cast outside of a person’s precinct, which leads to full ballots being tossed out even if they include statewide or national races the individual is eligible to vote in. The second is Arizona’s ban on collecting and delivering ballots for others ― often referred to as ballot-harvesting ― with an exception for family, caregivers, mail carriers and voting officials. The latter policy was adopted after Arizona was freed from preclearance by the court’s Shelby County decision.

The Democratic National Committee sued the state in 2016 to block those policies, arguing they were in violation of the “results test” added to the Voting Rights Act’s Section 2 in 1982. The “results test” section bars any voting restrictions that result in racial discrimination.

Both policies disproportionately affect nonwhite voters, challengers argued. Black, Hispanic and Native American voters in Arizona were more likely than white ones to vote outside their assigned precinct, the 9th Circuit found. And many people of color, particularly Native Americans, live outside of regular mail service, making ballot-delivery efforts more helpful to them.

Arizona Attorney General Mark Brnovich and lawyers for the state’s Republican Party defended both policies, arguing the 9th Circuit had wrongly applied Section 2 of the Voting Rights Act to block them.

Brnovich is currently running for U.S. Senate as a Republican.

Maybe some think that vote suppression is a relic of history — and so the need for a potent Section 2 has come and gone. … State after State has taken up or enacted legislation erecting new barriers to voting.
– Justice Elena Kagan’s dissent

The ruling also stated that the ballot collection ban was consistent with Section 2 of the Voting Rights Act because voters have other options for casting ballots. Plus, Alito wrote, Arizona was justified in enacting the rule to preserve the integrity of election results.

“[A] State may take action to prevent election fraud without waiting for it to occur within its own borders,” Alito wrote.

Alito did not entirely wipe away Section 2 of the Voting Rights Act, as Justices Clarence Thomas and Neil Gorsuch wished to do in a concurring opinion. But this decision will make it nearly impossible for voting rights advocates and the Department of Justice to win similar cases, particularly those related to the “time, place, or manner for casting ballots.” This means that most, if not all, of the limitations Republican-run states are adopting to limit absentee, early, provisional and mail-in voting will be upheld by this court.

In her dissent, Kagan proclaimed that the decision would further ongoing attempts to suppress voters through supposedly “neutral” laws. She blasted her colleagues’ interpretation of Section 2, arguing that Congress, not the court, should determine whether it needed to be changed.

“Maybe some think that vote suppression is a relic of history — and so the need for a potent Section 2 has come and gone,” she wrote, citing Roberts’ 2013 ruling that stated “things have changed dramatically” since the Voting Rights Act was written in 1965.

However, as she noted in her dissent, “State after State has taken up or enacted legislation erecting new barriers to voting” in recent months, saying the U.S. is “at a perilous moment for the Nation’s commitment to equal citizenship.”

“It decides this case in an era of voting-rights retrenchment — when too many States and localities are restricting access to voting in ways that will predictably deprive members of minority groups of equal access to the ballot box,” Kagan said.

The law should be interpreted as written until Congress changes it, she added.

“The law that confronted one of this country’s most enduring wrongs; pledged to give every American, of every race, an equal chance to participate in our democracy; and now stands as the crucial tool to achieve that goal,” she wrote. “That law, of all laws, deserves the sweep and power Congress gave it. That law, of all laws, should not be diminished by this Court.”

President Joe Biden issued a statement later Thursday saying he was “deeply disappointed” in the decision.

“After all we have been through to deliver the promise of this Nation to all Americans, we should be fully enforcing voting rights laws, not weakening them,” Biden said.

He called on Congress to pass both the For the People Act ― which Senate Republicans filibustered last week ― and the John Lewis Voting Rights Advancement Act to protect voting rights.

“The Court’s decision, harmful as it is, does not limit Congress’ ability to repair the damage done today: it puts the burden back on Congress to restore the Voting Rights Act to its intended strength,” Biden said.

Delving Into The Numbers – City of Covington's HUGE Budget Increase 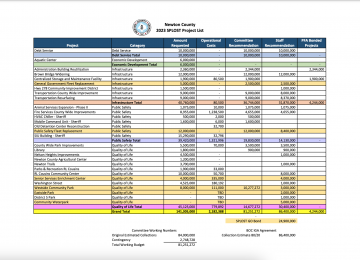